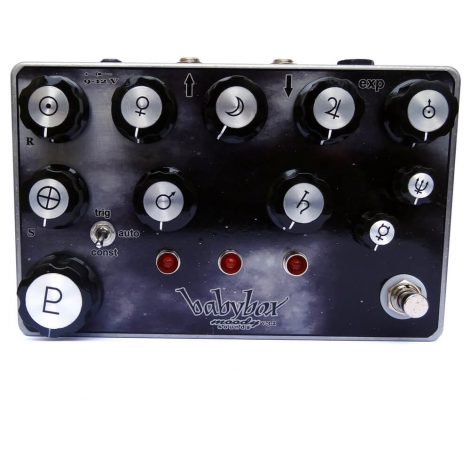 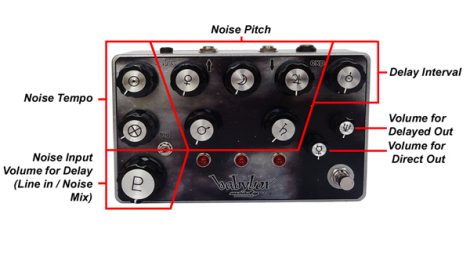 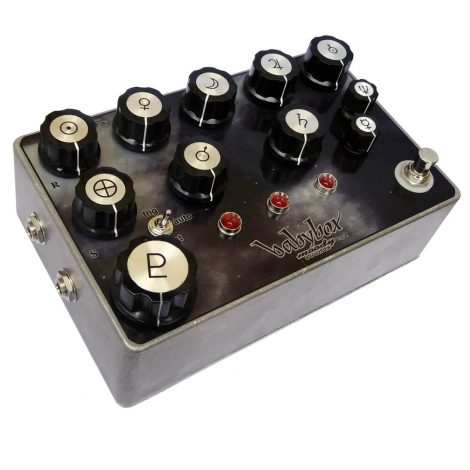 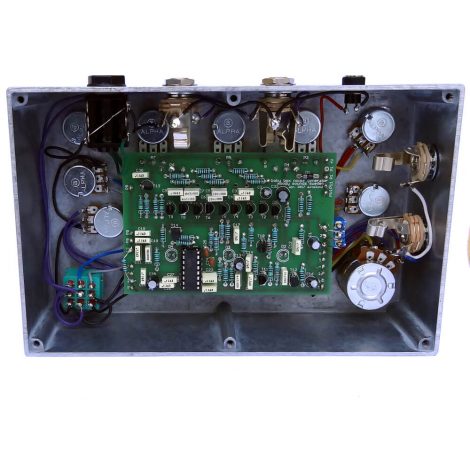 Production lead time for an assembled Baby Box is 3 to 5 days.

Baby Box Noise Generator is a chaotic noise machine. Use it to destroy your guitar signal completely, make spooky backgrounds or odd beats. The Baby Box is mainly a combination of three circuits, Fuzz, Delay and a Noise oscillator, and you can run it in one of three modes of action: Auto, Constant or Trig. In the Auto and Constant modes, it generates noise and you control parameters like noise pitch and tempo, delay interval and length, with its 11 control knobs.

The noise originates from oscillators in the Baby Box circuit. The signals from them are superimposed and a “noise” is produced. One of the oscillators has much lower frequency of oscillation than the others. It gives a “beat” to the noise (noise-silence-noise…) and the tempo is controlled with the Sun and Earth knobs, on the left side of the panel. Sun sets how long the noise pulses are and Earth sets how long the silence is between the pulses. You can set it to produce short noise punches, to long screaming tones with short pauses between. If both knobs are at min the pedal comes in Constant mode, gives a constant tone.

In the trig mode it is possible for other sound generating devices, such as a guitar, to “talk” to the baby box – an input signal sets off the sounds of the box. The big knob, Pluto, adjusts the mix between clean and noise. Turned all the way to the left, a clean unaffected signal comes out on the output. As it is turned up, a classic guitar fuzz blends in. The trigging of the noise oscillators begins when Pluto is near maximum.

The noise circuit is connected to a delay circuit, which puts some “depth” to the sound. The delay has two controls: number of repeats and time between repeats (Neptune and Uranus). The Baby Box is also furnished with a jack for Expression pedal. You can connect an external pedal and adjust the Interval time with it. The Exp-jack is connected in series with Uranus, and both the Exp pedal and Uranus adjust the time. If no Exp pedal is connected, Uranus alone sets the time.

Baby Box has stereo output. The signal is split up in two in the delay circuit, and different sounds are produced in the two output channels. Plug in stereo headphones directly to the output and have great fun!

This is a very moody pedal. If you want a decently behaving effect, maybe something else is better. We have added a true bypass foot switch to it. This is if you quickly want to bypass the odd sounds and get back to normal again!

Even though the same value of components are used, all boxes seem to behave different. This is one of the reasons it is great fun building this one.

The first Baby Box was made in 1976 by Johnny Roslund. It had only the noise generating part of today’s Baby Box circuit, but it had a small amplifier with a speaker built in. And it was built in a wooden box. The second Baby Box was built in 2004, also in a wooden box. No. 4 was made in a metal box and the circuit was developed a bit. The circuit was developed further in the next years and it got a delay and a second output channel for stereo out. A bit later the input channel with fuzz and true bypass for it came along, version 3.0. As mentioned the latest update, v3.2 nov 17, includes two noise tempo knobs and an EXP jack.