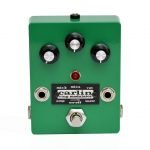 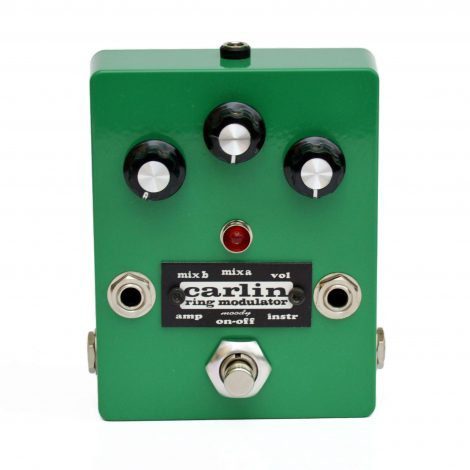 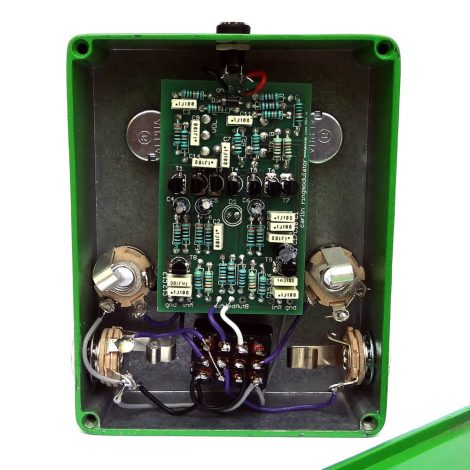 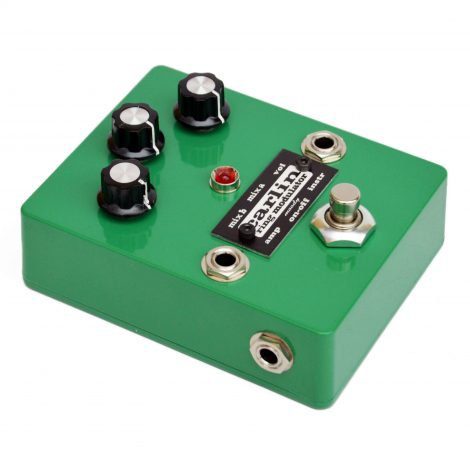 If this pedal is ok for immediate delivery, it is available on the Shelf. Normal lead time 3-5 days. Lead time for backorder, when this DIY kit is sold out, three to four weeks.

Much were going on in Sweden’s 70’s progressive music scene with bands like “Träd gräs & stenar”, “Kaipa”, “Peps Person Blodsband” and “Samla Mammas Manna”. These bands used the Carlin pedals and the pedals in a way contributed to the sound of the time. The Ring Modulator is probably the least known Carlin pedal and the reason for this is that it was made in a very limited edition, there are only three Carlin Ring Modulator originals! The pedal produces a true analog ringmodulator effect with edgy harmonics and with a piercing bite. A unique feature is that it has two inputs. Two insignals will blend and effect will come of interaction. In other words, you can use it on its own, as a regular ring-effect. And as a bonus, you can find new sounds by letting the main signal interact with a signal in input 2.

One can say that you can use the Carlin Ringmodulator clone in two ways. First the regular way, just guitar in and amp out. The pedal produces a tone that sticks out with some “dirt” and harmonics. You have some control of the tone because the sensitivity is fantastic. Reminds some of a good fuzz pedal but with a different sound. Another feature with this pedal is the natural compression it makes if a strong signal is sent to it, like if it is placed after a boost. In this traditional setup the pedal is controlled with two knobs, MIX A and VOL, and it has true bypass.

You can also use it in a more experimental way: if another sound source is connected to input 2, the two insignals will interact and a combined signal is produced at the outputs. There are limitless ways of affecting your guitar tone in this way. If you think the modulations are too big, simply turn down MIX A. You can also put a patch-cable directly between OUT B and IN B. Or try another pedal in this loop!

The main circuit of this pedal is a clone of the original. In Nov. 16 we did an update on suggestion on Nils Olof Carlin. This update involve buffered inputs and separate, buffered outputs. The first extension guarantees there are no treble losses due to low input impedance. The second allows you to use two amps independently. The update also include MIX A and MIX B knobs.

The logo is screen printed on a metal plate which is screwed on to the box. True Bypass. Powered with 9V adapter. This pedal is hand made in Sweden. Power supply is not included.

The first version of this pedal, v1, had not buffered in and outs and it had only one knob. See recordings below. Clip 2 show it with a Moody Fuzz circuit. Clip 3 shows it with some single interfering tones from a bass guitar. Clip 4 shows it with a sinewave from a tone generator, ca 1khZ, in the second input.

Be the first to review “Carlin Ringmodulator v2” Cancel reply