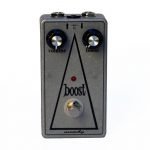 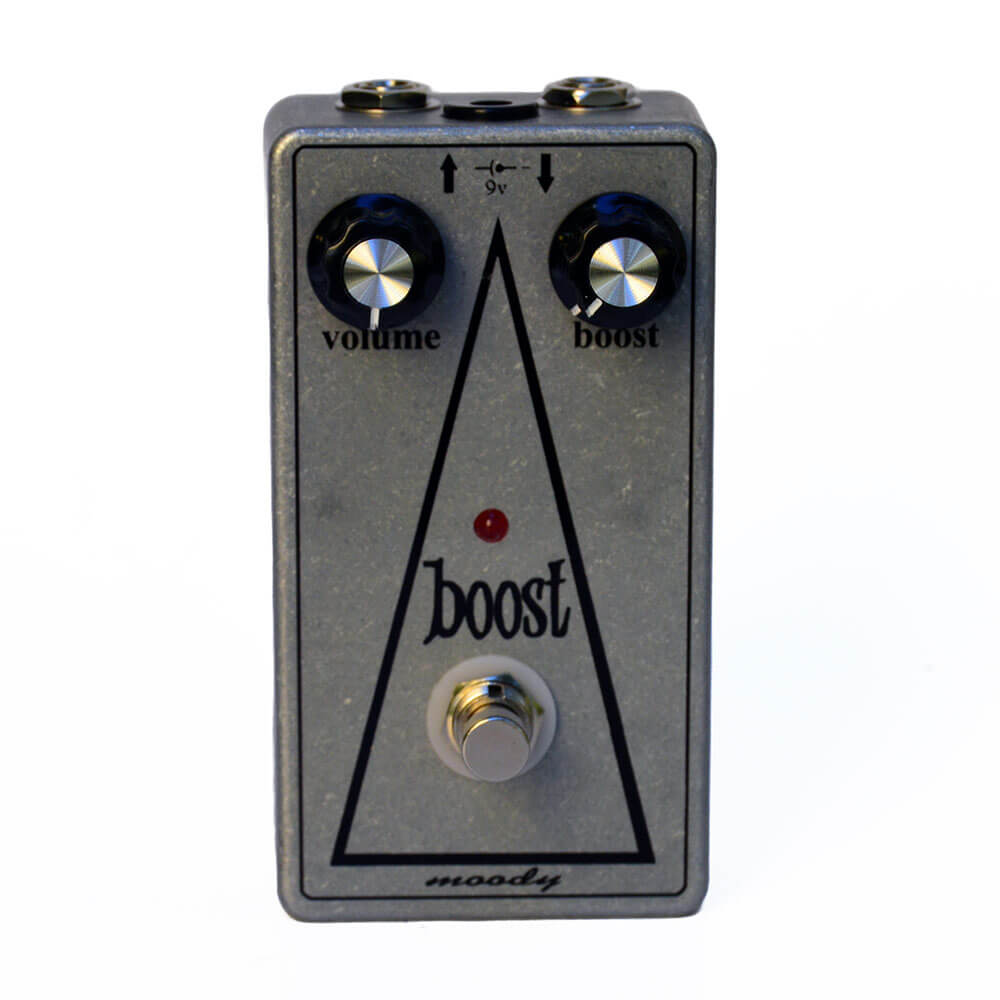 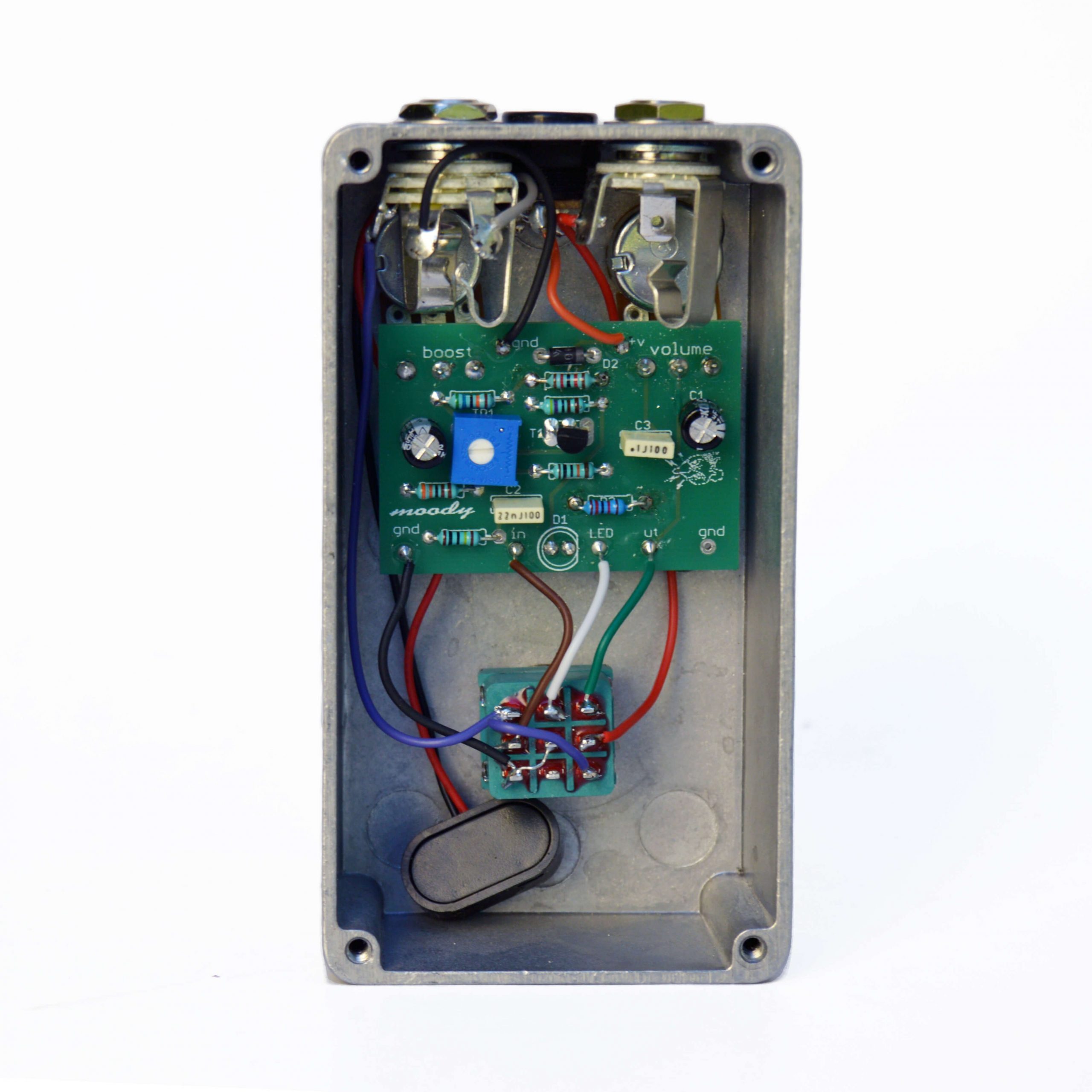 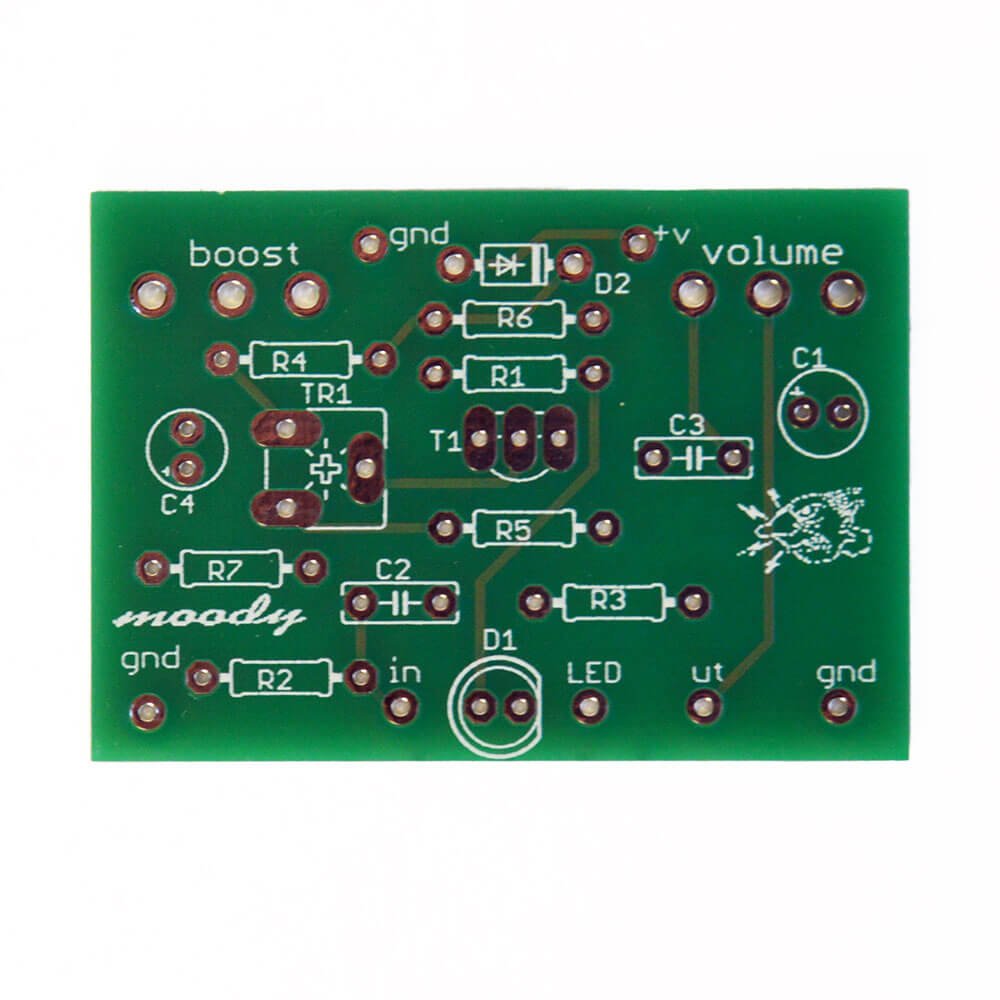 Moody Boost is a one transistor preamp. In spite of the simplicity of this circuit, you can use it to amplify and distort the signal lots. One popular way to use it is to let it push a tube amp and get more of its natural tone.

Moody Boost has two knobs, Boost and Volume. The Boost knob adjusts amplification and Volume adjusts attenuation. The point with having two knobs like this, one that increases and one that decreases, is that Boost also sets overdrive. If you want the pedal to produce some overdrive in itself, turn up Boost and set Volume to get an output volume that suits you. If you want a cleaner sound, or want more of the amps’ own distortion, keep Boost low and turn up Volume.

Moody Boost has true bypass. Power it with a regular 9V adapter/power supply or a battery.

If you are building the Moody Boost kit according to the manual, you will get a circuit that amplifies a wide range of frequencies. You will also get a pedal that distorts slightly when Boost is turned up, as mentioned already.

You can tweak the sound! The simplicity of the circuit and the relatively big distance between the components makes it ideal if you are a beginner with modifying circuits. For instance, a so called Treble Booster is a well-known concept in the world of pedals. If you lower the first capacitor in the circuit, “C1” in the Moody Boost, you will block the lower frequencies before they come to the transistor. This means that it will mainly amplify the higher frequencies and on the floor in front of you will soon be a Treble Booster. A bigger C1 would make the boost amplify lower parts of the spectrum too (best choice for bass?). One resistor, “R4”, also sets the circuits amplification. If you change R4 you will change the ranges for the two controls knobs. A big R4 will give you more amplification with more overdrive and vice versa.

A few extra components are included if you want to work some with these parameters. Also included is a transistor socket. It is if you want to see what the pedal sounds like with another transistor. Why not try it with a germanium transistor like AC127, to get “the right vintage sound”? Some other suggestions for mods are at the end of the manual. Even more, mods are in the pdf linked below (in Swedish only at the moment). Also, see the “Distortion conversion mod” linked below.

Level of difficulty: 2 (of 5)
The manual for Moody Boost kit (v4 Swedish)