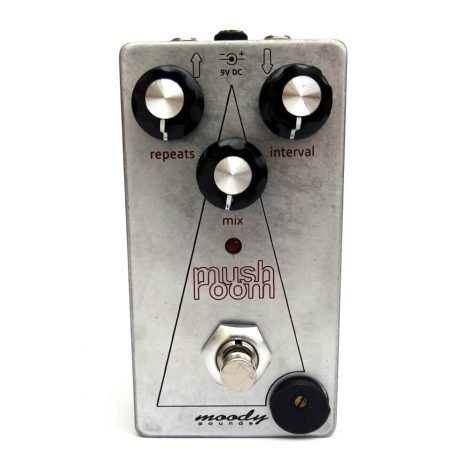 Production lead time for an assembled Mushroom Eye is 5 to 7 days.

The inspiration for the Mushroom Echo pedal comes from the fun sounds you get when you turn the Interval knob on some delay pedals. It sounds twisted, distorted … and the idea was to make this effect available for interactive play. A pitch pedal that you can adjust while playing!

Mushroom can be controlled with a force sensitive resistor (FSR). When you press with your foot on the patch, which sits over this sensor, the pitch changes. The sensor is located in the lower right corner of the pedal so that it is easily accessible.

In other words, you can add a pitch-bent tone in the middle of a solo, or create completely skewed backgrounds, or create a chorus that follows as you press on the sensor.

Basically, Mushroom is a traditional delay pedal. The circuit is based on the PT2399 chip and the pedal is equipped with Interval, Repeats and Mix knobs. If you ignore the sensor (if you do not touch it), in other words you have a nice delay pedal. Maybe these control knobs do not need further explanation but it is quickly written anyway. Interval sets time between repetitions, Repeats sets how long the repetitions should last and Mix sets the mix between clean / buffered sound and effect sound. A couple of details are that Repeats is connected so that when it is at max, the circuit creates positive feedback in the sense that each repetition is higher than the previous one, and you quickly have a sound mess that may fit certain experimental parts of a song. If you turn it down a little from max, this positive feedback ceases. Another detail is that if Repeats is in min and Mix turned up a bit, you get exactly one repeat.

Mushroom has true bypass and is powered by a 9V or 12V DC adapter with standard polarity.

The sensor is placed in a small recess under the patch, to protect against wear and for the effect to return to “normal delay” when not pressing.

We have not done a new demo of this pedal yet (Jan21) but there is a demo of an earlier version which is controlled with a light-sensitive resistor. It also had a slightly different layout and the demo below shows this pedal. The basic circuit is the same, but the big difference is that the current version is controlled with pressure.